Giving Away Junk is a Serious Decision

Since we do eviction, foreclosure and estate cleanouts, we end up with recyclables, donations and sellable 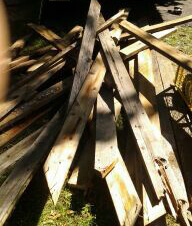 items. We have vowed against giving items away for free online because of what you are about to read. It’s one thing having a stranger on your property if they are giving you money, it’s another if they are overstepping their welcome when getting free items.

We had some lumber that had nails in it, decent shape except that the nails needed to be pulled out. We put it for FREE online in order to recycle as much as possible. A lady came to get some and decided to plant herself on my driveway for almost an hour taking the nails out of each board. As if that wasn’t bad enough, she then asked to borrow a saw to cut the wood down. I did have a saw but had no problem telling her that I did not. Why would I lend someone a tool, that could cause a major injury, on my property so that she can then sue me if she had gotten hurt?

This wasn’t the first time that we had an issue with someone getting free stuff.

I posted a mattress for free online. A lady knocked on my door asking where it was. I directed her to the end of the driveway. I guess it wasn’t nice enough for her because her husband then tried to open my garage to get inside to see if there was a mattress in there. Who would do such a thing? Even though I didn’t go outside, it was scary just knowing that someone would try to enter my house without permission in order to get something for free. I know that there are robberies all the time. We wouldn’t expect to have a robbery in the middle of the day from someone who was invited over. We really don’t know what someone’s intentions are, so we decided that the FREE category does come with strings attached.

If someone is coming over, male or female, know who they are otherwise you can be putting yourself and your family into danger.